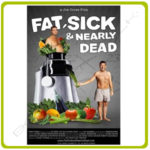 This is not a new movie (from 2010) but I have just watched it and I really recommend it. It is a documentary based on a guy’s quest for the cure of a rare skin condition. After being on medication for years with little results, Joe Cross decides to reboot his life through juicing. He spent 60 days cruising the USA while on a complete juice fast[1] interviewing Americans along the way.

Even though it seems quite a radical approach (well, in fact it is radical) he could restore his health and even help others along the way. However, the real lesson in the movie is hardly about a new fad diet. I believe that his goal was not trying to convince people to engage in his challenge, but to understand what motivates people to eat what they do on regular basis.

I would say that the movie is more about behavior change than it is about diet. Several interviews throughout the movie clearly showed that people know what they are doing wrong. They just don’t see a reason strong enough to change it. All they say is “I know I shouldn’t eat that much fast food but” or “I should eat better but.” There was always a “but.” Not even the threat of debilitating diseases seems to compel people to change. Most call themselves weak or say they have no will-power. Some say that they need the instant gratification they get from food which means that eliminating that little pleasure from their lives is perceived as bad as, if not worse than, a debilitating illness or even death.

Which makes me think: What has to happen in someone’s life to push her/him into a new direction? What do you think?

[1] The only thing he ate for the duration of his self-imposed challenge was fresh fruits and vegetables in the form of juice.